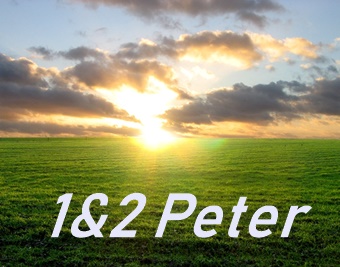 For Christ also suffered once for sins, the righteous for the unrighteous, to bring you to God. He was put to death in the body but made alive in the Spirit. After being made alive, he went and made proclamation to the imprisoned spirits— to those who were disobedient long ago when God waited patiently in the days of Noah while the ark was being built. In it only a few people, eight in all, were saved through water, and this water symbolizes baptism that now saves you also—not the removal of dirt from the body but the pledge of a clear conscience toward God. It saves you by the resurrection of Jesus Christ, who has gone into heaven and is at God’s right hand—with angels, authorities and powers in submission to him.

As the chapter concludes, Peter continues his discussion of opportunity and suffering, with the ultimate example of Jesus.  Jesus suffered greatly that we might be saved from sin and death, and He did this while deserving none of the suffering, but accepted it anyway for the opportunity to redeem humanity.  As a result, He was killed in the body, but made alive again in the Spirit. This is a familiar story for a Christian I hope…

I really try to avoid complicating these lessons with discussions of various translations and Greek… but to understand verse 19, I can’t see a way to avoid it.

The NIV goes on to say: After being made alive, he went and made proclamation to the imprisoned spirits— In the NIV, there is a footnote after the words “…made alive…” that I have edited out (but probably shouldn’t have) that reads, “Or but made alive in the spirit, 19 in which also.”

The more literal translation of the NASB says, in which also He went and made proclamation to the spirits now in prison.  Looking at the Greek, I found the words, ᾧ καὶ (hos  kai) which mean “in which also”

Thus, I conclude that what Peter is telling us is that Jesus died in the body and was made alive again in the Spirit, in which also (in the Spirit) he preached to those who are now dead, but who were disobedient in Noah’s day.  The introduction of Noah’s day is important in Peter’s overall point as we will see in a minute.  Sorry for this little excursion, but this is a verse that is often misunderstood, as some do teach that Jesus died and went to Hell to redeem the lost there, and while that might be a nice thought, it isn’t the point Peter is making here, I’m afraid.

Jesus, in the Spirit, or as the Spirit, preached repentance to those who were acting in rebellion against God while Noah was building his ark, as God was about to judge the earth and wanted to save as many as possible from His judgment, but in the end, only eight would follow God and they were saved through the waters of the flood (being in the ark). The waters of the flood now symbolize baptism, which saves us also, not the removal of dirt from the body but the pledge of a clear conscience toward God. It saves you by the resurrection of Jesus Christ… You will surely recall that Paul makes similar comparisons between our “death” in baptism, and our being raised out of the water to a new life.

As a result of what Jesus did, He now sits in majesty in heaven… and in due course we, as His co-heirs will join Him.  This is the ultimate opportunity for suffering, should God will it for us, to become a testimony of our faith in Him, that others who see this will come to belief and repentance.  Therefore, should suffering come your way, take heart, for God is working through you, and you will receive the prize for which we all strive.

A long time teacher and writer, Don hopes to share his varied life's experiences in a different way with a Christian perspective.
View all posts by Don Merritt →
This entry was posted in Bible and tagged Bible study, Christian, discipleship, encouragement, hope, inspiration, Jesus, life, love. Bookmark the permalink.