Where the Guns Fell Silent, Redux

I first posted this back in 2015, but with the observances for Memorial Day fast approaching, and considering the fact that Memorial Day (originally called “Decoration Day) was established to honor Civil War fatalities, I thought this might be a good time to run this one again…

This was the home of Wilmer McLean and his family on that fateful in April of 1865. I had the opportunity to visit this home a couple of weeks back, and I thought I would share a little about my visit with you today.

Mr. McLean was no stranger to the War, for in July of 1861 he owned a home in Manassas, Virginia, the site of the first major battle of the American Civil War. His farm there served as the Headquarters for the commander of the Confederate army and was bombarded by Union forces, after which he packed his family off to Appomattox Court House, Virginia where they lived in this house on April 9, 1865 when General Lee and General Grant met in his parlor to sign the surrender that effectively ended America’s bloodiest war. 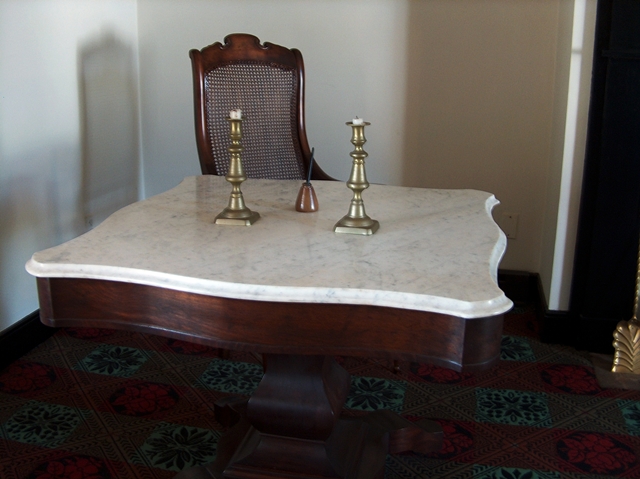 General Lee signed the surrender here at this table. 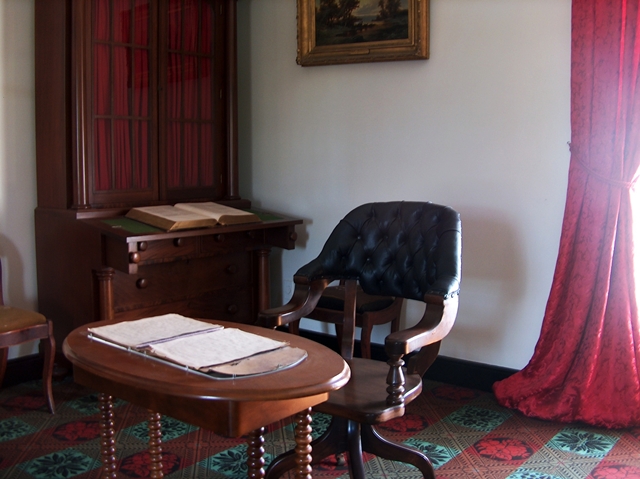 General Grant signed at this table a few feet from General Lee.

What are the odds that this man’s home would be shelled in the first battle of a major war, resulting in the family moving a couple hundred miles out of harm’s way, and then being in just the right spot for the end of the war to literally happen in their living room?

Warfare was different in those days, well maybe everything was different then. When the Confederate army surrendered, nobody was thrown into POW camps, nobody was taken out and shot or beaten or tortured. They turned over their guns to the Union army, promised not to fight any more and were sent home. For such a long and bloody conflict, with so many hundreds of thousands of casualties, it must have seemed almost an anticlimax.

Did I mention that April 9th that year was Palm Sunday?

General Grant was criticized by a few who thought he was too generous in his terms of surrender, but he had been acting on orders given to him a few days before by President Lincoln who thought that it would be important for the defeated men to get home in time for spring planting; can you imagine anybody thinking like that today?

On Good Friday, just five days later, President Lincoln would be assassinated, and for 150 years people have noted the coincidental dates…

I had a long chat with one of the park rangers right next to this marker; I was quite surprised when he told me that this marker had been placed there in the 1890’s. He said it was a lot easier to maintain than the new markers. I had to chuckle at that… so much has changed over all of the years that have rolled by.

The fields surrounding Appomattox Court House are peaceful now, you would never guess that a war had raged here 150 years ago, nor would you ever guess that they played witness to one of the seminal events of our history. For the most part, I find that history is like that; you can step right on past it and never notice, as most people usually do. Yet in this area, the area I’m not all that crazy about living in, history is everywhere you look, if you only have eyes to see it.  My eyes might not be able to see much of the modern world any more, but I do see the past as I walk along… and I wonder as I go “will we ever come to a place where we get over the notion that we must slaughter each other every so often?”

I have no answer for that one and if I would venture a guess it would be no. It would seem that this vile impulse is a part of who we are as humans… or is it just some of us…? Again, I can’t say. I do know that there are times in this life when a Nation has no alternative… and the words from the Psalm ring in my mind, “How long O Lord…?” That is usually when another line comes into my mind, But we see Jesus, who was made a little lower than the angels, for the suffering of death crowned with glory and honor, that He, by the grace of God, might taste death for everyone., and I remember that the day is coming, and will come, when He will put an end to suffering, pain and even to death itself. What a glorious day that will be!

A long time teacher and writer, Don hopes to share his varied life's experiences in a different way with a Christian perspective.
View all posts by Don Merritt →
This entry was posted in Christian living and tagged Christian, encouragement, history, hope, love, photography. Bookmark the permalink.

2 Responses to Where the Guns Fell Silent, Redux