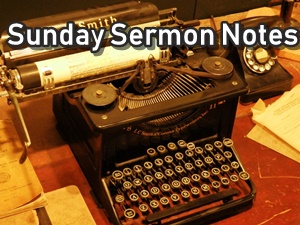 Title: Vineyards, Tenants and the King

As we have come to expect, Mark gives us the simple facts of the day that Jesus rode into Jerusalem as King and Messiah without fanfare or explanation of prophecies and Jewish traditions and expectations. In spite of this, anyone with some understanding of such things will recognize that the very manner of Jesus’ entry into town was a statement of who He was and why He had come.

Verses 1-6 tell of the arrangements, Jesus sending a couple of disciples out to get the donkey for Him to ride into town, and everything being just as Jesus had told them, yet we shouldn’t rush through this quite so fast. If you’ve been following along with this study, you will have noticed that Jesus, while He went around the countryside preaching the Kingdom, shied away from announcements of who He was, and often told the recipients of miracles to keep quiet about what had happened between them. Now by contrast, Jesus has a donkey to ride into town, and considering the fact that a donkey colt, never ridden, would be His method of transportation into the city, was exactly what had been prophesied for the entry of Messiah, (Zech. 9:9) Jesus was now “coming out.”

It strikes most of us as odd that a King would ride into the city on a donkey, rather than on a mighty steed, and many have misunderstood this to be a show of humility, but that is a Western notion. For the Jew, horses were reserved for warfare and a king would ride a donkey in peacetime; they were highly prized in fact for they are more durable and reliable than a horse. Jesus was making a statement, there’s no doubt about it, that He was King and Messiah.

When the colt was brought to Jesus, people took their cloaks and placed them on His mount for Him to sit upon, while others spread their cloaks out on the ground before Him, an honor reserved for a king. (2 Kings 9:13) Notice that Jesus no longer objected to this sort of thing. As Jesus began His procession into the city, people began to pour out to greet Him and others poured in with Him, there were shouts…

“Hosanna!”
“Blessed is he who comes in the name of the Lord!”
“Blessed is the coming kingdom of our father David!”
“Hosanna in the highest heaven!”

Mark has recorded an interesting combination of shouts here! “Hosanna” literally means “save” and the people used it in the sense of a praise. They recognized by their acclimation that Jesus had come in God’s name, and then they tie this together as a sort of bridge between the past and future glory of Israel with the reference to Jesus as the son of David and rightful king. If you take a step back from the scene, tumultuous as it no doubt was, and reflect on the things Mark records here, there is an interesting picture:

Jesus came to Jerusalem to save the people, He was the Anointed One of God, coming in peace to God’s city, and He was transforming the throne of David from an earthly to a heavenly one. In the end, that was exactly what would happen in one week’s time.

Jesus travelled all the way to the Temple court, but when He arrived there, nobody from the Temple greeted Him. Mark mentions politely that it was late, but if the Chief Priest had been doing his job, the entire court would have rolled out the red carpet for the Messiah. Of course, they had other plans for God’s Anointed One.

Few teachers teach this section from Mark’s account, preferring instead to use the parallel in Matthew or Luke with their more confused timelines, but Mark’s timeline is much more clear than the other two. As a teacher or commentator, you have a choice here: You can take individual events out of this narrative and discuss a great amount of detail regarding money exchange, buying and selling of sacrifices and use the fig tree to support your favorite end times theory, or you can keep them within Mark’s context and see something wonderful. My approach for today is to leave these events within Mark’s timeline and gaze at them in wonder and amazement.

Remember that after the Triumphal Entry, Jesus proceeded to the Temple court and, finding the area deserted, returned quietly to Bethany for the night. The next morning, He sets out once again for the city. On the way, He sees a fig tree and walks over to it hoping to find some figs to eat. Seeing none there, He curses the tree, saying “May no one ever eat fruit from you again.” (v. 14)

He continued into town and went to the Temple courts. This time, He found them full of activity, mostly of the buying and selling variety, and He drove out the money changers, the vendors and all the rest saying, ‘My house will be called a house of prayer for all nations’? But you have made it ‘a den of robbers.’ (v. 17)

Now, catch the next verse:

The chief priests and the teachers of the law heard this and began looking for a way to kill him, for they feared him, because the whole crowd was amazed at his teaching.

Mark has already told us that the Pharisees were plotting to kill Jesus, along with the allies of Herod; now the chief priest join the conspiracy… but notice why: “because the whole crowd was amazed at his teaching.”

Jesus walks into the Temple and shuts down the business operation and reminds the people that the Temple is supposed to be a house of prayer, and not a profit center… and the people are amazed! It almost sounds like prayer at the Temple was a novel concept, which it probably was.

The next morning, as they went past the fig tree from the previous morning, the disciples notice that it has withered, and now they are amazed.  Peter calls the tree to their attention, and Jesus sums up the point of this entire section: prayer, faith and forgiveness.

“Have faith in God,” Jesus answered. “Truly I tell you, if anyone says to this mountain, ‘Go, throw yourself into the sea,’ and does not doubt in their heart but believes that what they say will happen, it will be done for them. Therefore I tell you, whatever you ask for in prayer, believe that you have received it, and it will be yours. And when you stand praying, if you hold anything against anyone, forgive them, so that your Father in heaven may forgive you your sins.”

Jesus responds to Peter by speaking of faith and prayer, you can almost say that He is really referring to our relationship with God here: Faith in Him, interaction with Him in prayer. He also mentions that when we interact with God, we need to forgive our brothers and sisters if they have wronged us in any way; sounds like love your neighbor, don’t you think? Hmm… love God, love your neighbor: see the parallel?

Back to the beginning again: Jesus wishes for the fig tree to bear no more fruit, goes to town and chases the worldly business out of the Temple, which is God’s dwelling place on earth and the center of the Jewish relationship with God, stating that it is a place of prayer (interaction/relationship) and the chief priests want Him killed for interrupting their business. The next day, the fig tree is dead, and Jesus teaches an object lesson on putting your relationship with God first and foremost in your life, which is the same thing He was teaching at the Temple.

What comes first in our lives, work, money, profit; the things of this world? That seems to be the view of the chief priests who had a great little business going in God’s house. What are our churches all about, are our priorities the same as those of the chief priests? Could it be that this is the cause of a weak prayer life for us individually, and why many of our churches are not very effective for the cause of Christ?

Maybe, maybe not, but that was the lesson Jesus was teaching on that Monday and early Tuesday morning, and I hope we will reflect and pray on it.

After Jesus’ discussion of the fig tree, He and the disciples enter the Temple courts and are observed by the priests and their entourage; the priests waste no time in challenging Him…

The Chief Priest demands to know by what authority Jesus is saying and doing the things He’s been up to, and I’m sure that His attack on their little Temple gold mine was foremost in their minds. Jesus, a tough customer, isn’t going to play their game, so He asks them a question of His own: By what authority did John the Baptist do what he did?

Pay close attention to verses 31-32 and look at their reasoning: Pure politics! They settled on “I don’t know” in an attempt to dodge the question, so Jesus told them that He wouldn’t answer them either. Notice in His wording that He fully recognized their dodge. The text tells us they feared the people who believed John, but they also must have known that John testified concerning the identity of Jesus; He really had them in a corner.

Then, remarkably, Jesus answers their question in a parable.

The Chief Priest, the other priests, teachers, Pharisees and all the rest of them, knew exactly what Jesus was saying in the Parable of the Tenants; He was telling them the history of their people in a nutshell. Just as in Isaiah 5, the vineyard is Israel, they themselves are the tenants who beat and killed all of the servants God sent to them, yes, for those servants were the very prophets these guys talked about all the time. Now, God (the owner) has sent His Son to them, and they will kill Him too… and they will pay quite a price for their evil deeds.

Jesus finishes the parable off with a quote from Psalm 118 for good measure; they knew instantly who the “cornerstone” was… the stone the builders rejected. Jesus wasn’t going to play their games, but He was most assuredly speaking their language, and they were not pleased. It’s interesting don’t you think, that nobody stopped to consider the likelihood that Jesus was telling them the truth and offering them a way out of their jam.

At this point, they retreated. Jesus has fought off the first attack, but there were more coming, after all, it wasn’t even lunch time yet!

A long time teacher and writer, Don hopes to share his varied life's experiences in a different way with a Christian perspective.
View all posts by Don Merritt →
This entry was posted in Sunday Class Notes and tagged Bible study, Christian, encouragement, hope, inspiration, Jesus, life, love. Bookmark the permalink.